‘Mayans were wrong’ states a huge Vredestein billboard next to the Amsterdam highway. How wrong can you be, not to mention the casual insult of a culture?
The Native Americans predicted the end of an era, with 21/12 being a key date. Afterwards we could move into a new time, which they called ‘the age where we will meet ourselves again’. 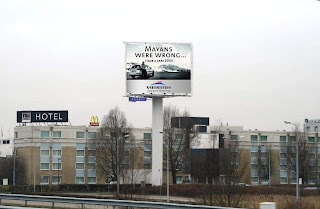 That new time has just begun, and while we are not heading towards a disastrous end of the planet, it doesn’t mean it could not get tough. The smoothness or roughness of the transition may be correlating to the structures one believes in or clings on to.
Recently I spoke with an Inca shaman. He explained what the predictions were really about: because of cosmic shifts, another energy, with a higher vibration, will influence earth, our bodies, brains and hormones. This energy shakes up old structures, cuts through falsity and forces to let go of ideas that lead us away from our core.
So what is asked of us right now? The shaman’s answer: to bring our head (wisdom), heart (love) and belly (action) into alignment, to follow our path, and to express whom we really are. People driven by fear, money, power, or self-interest might find themselves sooner or later struggling with the powers of the universe.
I have felt the shift: the energy is so light, soft and strong these days. Don’t jump to the conclusion now I ended up in a hallelujah place: I still pick fights with my husband, and I am still impatient, bitchy and self-righteous, and because of unforeseen events my future is suddenly totally unclear. Yet a trust and easiness have come over me I have never experienced before. It feels almost like I can finally start doing the things I have been preparing for.
While I go into hibernation to ponder upon the nature of those things, I would like to wish the Vredestein publicity department lots of luck in 2013.